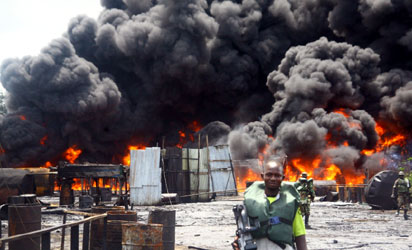 This was contained in a statement made available to newsmen in Yenagoa, the Bayelsa State capital by the JTF Media Coordinator, Lt.-Col. Onyema Nwachukwu.

He said the suspects were arrested at a recent anti-oil theft operation near Escravos in Delta.

According to him, the group procures illegally refined petroleum products from the Niger Delta for sale abroad.

He added that the gang, made up of six Nigerians and one Beninoise are being interrogated at the JTF Headquarters in Yenagoa.

Nwachukwu said that a locally made boat containing 11 large plastic reservoirs and a speed boat were recovered from the suspects.

Also destroyed, he said, were seven illegal distillation sites in Moboko, Irhado, Agbekudo and Obodo camp all in Delta.

He noted that some of the sites were located at Ajeosoho, Sapele Water Side and Omere in Ethiope West, Okpe and Sapele local government areas.

According to him, operatives of the Operation Pulo Shield also arrested seven suspects for alleged involvement in illegal oil bunkering in Bayelsa.

The suspects were arrested on board a Barge, MB LILLY, which was intercepted by JTF operatives along the Akassa creek.