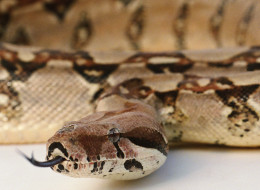 SHIRLEY, N.Y. — An animal-control officer had hundreds of snakes, including two 6-foot Burmese pythons, at his home, where he ran an illegal side business selling them, authorities said Thursday.

There were 850 snakes worth half a million dollars in a detached garage at the Shirley home of Richard Parrinello, including the Burmese pythons, which are illegal in New York state, officials said.

“There is a reason why Burmese pythons are illegal,” said Suffolk County SPCA Chief Roy Gross, citing the deaths of two young boys in New Brunswick, Canada, who were killed by an African rock python while they slept last month.

Gross said Burmese pythons can grow to 30 feet long and are “an accident waiting to happen.”

Parrinello has worked on and off as an animal-control officer for the town of Brookhaven since 1988, town spokesman Jack Krieger said.

Authorities spotted the snakes during an investigation into whether Parrinello was working while on disability leave from his town job.

During a weeks-long undercover investigation, authorities said, investigators caught Parrinello on camera claiming he had $500,000 in inventory – including snakes, turtles and turtle eggs – stored in a garage he’d converted into habitat space.

Parrinello faces multiple charges of owning the pythons and violating town codes by running a business at his home without a permit. He was issued two violations by the state’s Department of Environmental Conservation.

Authorities said Parrinello is cooperating. A man who answered the phone at a number listed on Parrinello’s Snakeman’s Exotics website said he had no comment.

Gross said the pythons were headed to an animal sanctuary in Massachusetts. It was unclear what would be done with the other snakes.