In a very tragic incident, a mother who starved her four-year-old son to death and kept his mummified corpse in a cot in her bedroom for almost two years while claiming his child benefit, has been arrested.

Hamzah Khan’s body was still dressed in a baby-gro when police made the ‘dreadful discovery’ at Amanda Hutton’s house in Bradford, West Yorkshire.

It was revealed in court that the boy, four, was so small he fitted into clothes for a six-month-old child.

He was found dead next to his favourite teddy in the room where Hutton, a habitual cannabis smoker who drank a litre of vodka every day, slept each night.

Neighbours complained because of the smell from her house and when she started tossing soiled nappies into her garden.

‘Hamzah’s growth had been stunted,’ the prosecutor said.

‘It had been stunted because he was malnourished over a lengthy period and that state of affairs resulted in his death.

‘In short, he starved to death.

Evidently, the body was found within a court in Hutton’s bedroom, beneath other items.

‘What they discovered disturbed even hardened officers,’ he said. 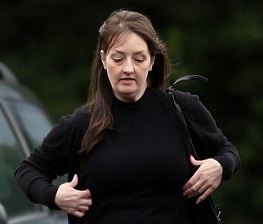 It was also revealed that Hutton ordered pizza within hours of her son’s death and continued to claim child benefit for him.

On December 14 2009, Hutton explained that when she returned Hamzah was near to death. She sought to revive him but to no effect.

She described placing Hamzah into his cot, making plain that she had treated his body with dignity, and it is right that we should observe that Hamzah’s body was found, it was found with a teddy.

Hutton told police that things deteriorated after her son’s death and she began to drink a bottle of vodka a day.