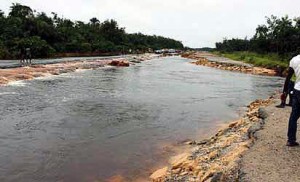 Following years of dashing the hopes of road users and incessant delay in completion of the East-West road, the National Assembly has advised the Federal Government to explore alternative funding sources to ensure the completion of the road, which requires a total of N141 billion to meet its December 2014 completion timeline set out by the Ministry of Niger Delta Affairs.

The lawmakers also believed that being a massive project, 2015 completion target should be pursued to ensure quality, considering funding challenges, the topography of the region and weather factor.

Members of the Senate and House of Representatives Committees led by their chairmen—Senator James and Honourable Warman Ogoriba respectively, told journalists at the weekend, after inspecting the road with the Minister of Niger Delta Affairs, Elder Godsday Orubebe, that the federal government needed to explore alternative funding sources to ensure the completion of the all-important road.

Orubebe had a while ago assured Nigerians, particularly people of the Niger Delta, that the N347 billion East West highway dualisation projects would be completed and deliver by December 2014.

According to him, the 338 kilometres dual carriageway was very strategic and would be completed at the stipulated time.

Orubebe said, “With the level of commitment by this administration, the road would be completed by December, 2014. Some sections of the road have been completed and are due for handing over by the contractors,” he had said.

“This is a road of over N339 billion and we are looking for N141 billion; once we have that, we will be able to complete the road very well,” he said.