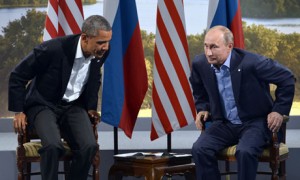 US President, Barack Obama, has welcomed the deal reached on Saturday to strip Syria of chemical weapons, but said much remains to be done.

In a statement, Obama warned Damascus to comply with the accord and said that if the regime of Syria’s President Bashar al-Assad does not live up to the deal Washington reached with Syria’s ally Russia, “the United States remains prepared to act”.

Obama said the accord was made possible “in part” by what he called his credible threat to use force against Syria as punishment for its alleged use of chemical weapons against civilians last month that according to American estimates killed about 1,400 people.

“We now have the opportunity to achieve our objectives through diplomacy” he said.

Syrian government has denied using chemical weapons on civilians, and instead accused rebels for the deadly attack.

Syria has a week to declare its chemical weapons and must allow international inspections, the US Secretary of State John Kerry said after talks with his Russian counterpart Sergey Lavrov.
The demands are part of a six-point plan aimed at eliminating Syria’s stockpiles by mid-2014, which was agreed by the US and Russia after three days of negotiations in Geneva.

Speaking at a news conference with Lavrov, Kerry said that weapons inspectors should be on the ground in Syria by November with the goal of eliminating President al-Assad’s stockpiles by mid-2014.

The agreement did not mention any threat of force if Syria failed to comply, instead stating that the regime would become the subject of an as-yet unwritten UN Security Council resolution.

Efforts earlier this week to draft a resolution were complicated by Russia and the West’s differences on the threat of force.

The agreement was however criticised by General Salim Idris of the Free Syrian Army, the main armed opposition group.

“We cannot accept any part of this initiative,” he said. “The FSA will work towards toppling Assad and does not care about US-Russia deals. I and my brothers in arms will continue to fight until the regime falls.”

He added that the FSA was “frustrated, and feels betrayed by the international community. It has no faith the UN will ever support it”.

The US accuses the Assad regime of killing 1,429 people in a chemical assault in Damascus suburbs on August 21. Assad denies involvement in the attack. The US at first pushed for military action against Assad, but later agreed to try to find a diplomatic solution after the intervention of Assad’s ally, Russia.

The US-Russia deal could also pave the way for the resumption of peace talks to end the civil war, now in its third year. More than 100,000 people have been killed, and millions have fled either to other countries or to safer areas within Syria.