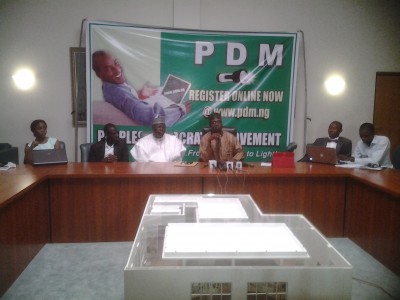 The Peoples Democratic Movement on Monday said its members could now register on-line as it commenced a nationwide registration of its party members.

The National Chairman of the party, Bashir Ibrahim, said this at a news conference in Abuja.

He said an alternative manual registration would be provided, especially for those in the rural areas and because of the unstable power supply system in the country.

“The register for the exercise will be used to conduct congresses and convention.

“Before now, membership of any political party was a privilege, but with the on-line registration, it has become a thing of the past.

“We have decided to level the playing field by creating a platform for interested Nigerians to have free access at their own choice,” he said.

Mr Ibrahim said the on-line registration would provide opportunity for the youths to participate actively in politics and lend their voice.

He described PDM as a bridge between generations of this country, saying that it allows youths to come on board to participate in active politics.

The party national chairman said the on-line registration would also give opportunity to Nigerians in the Diaspora to register, vote and be voted for.

Ibrahim advised party members to ensure that they print out their slips after registration, which they would take to their respective ward secretariat for collection of a membership card.

He said the membership card would be at a fee, which was yet to be decided by party’s executive committee.

Ibrahim said it was so unfortunate that the nation’s political process did not provide for Nigerians in Diaspora to vote at any political level.

He said that in view of their meaningful contributions to the Nigerian economy, it would be unfair to disenfranchise them; therefore, PDM was making a case for them.

“We are going to fight for them no matter what it takes and for how long; it is a dream that will come to reality very soon.

“How can a country disenfranchise her citizens that are remitting over 21 billion dollars to her economy annually, it is unfair, where did you want them to belong?” he queried.

The News Agency of Nigeria, (NAN) reports that the nationwide registration was coming up barely a month after the party was registered by the Independent National Electoral Commission, (INEC).