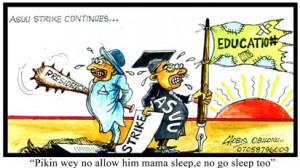 The Pentecostal Fellowship of Nigeria, PFN, has expressed worries over the prolonged strike embarked upon by the Academic Staff Union of Universities, ASUU, and has therefore urged the Federal Government to hasten peace moves in the interest of Nigerian students.

In a statement, yesterday, by its National President, Rev. Felix Omobude, in Benin City, Edo State, PFN acknowledged the alleged failure of the Federal Government to honour the agreement reached with ASUU in 2009, and appealed to both parties to find an urgent solution to the problem so as not to destroy the university system.

“While PFN salutes the spartan courage of the leadership of ASUU for its positive position on the urgent need to revamp and reposition the education sector, PFN is of the strong view that the need has arisen to bring into sharp focus, the crushing brunt the country is now being made to bear for the continued closure of the universities.

“PFN appeals to ASUU not to throw away the baby with its bath water but should return to class as soon as possible in the interest of parents, students and indeed, the country,” Omobude said.

The group also urged the Federal Government to treasure the integrity that goes with honouring agreements by implementing the said ‘2009 agreement’ with ASUU with candour and greater commitment as that will reposition and service the education sector on continuous basis, instead of waiting to be stampeded into action by strikes.