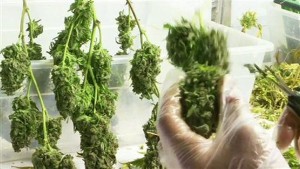 On Monday, Colorado officially became the first state in the country to finalize and adopt the rules for recreational marijuana sales.

The 136-page report released by the Colorado Department of Revenue outlines the rules for the state’s new recreational marijuana industry and covers everything retail marijuana store signage, product labeling, cultivation, testing and warehousing.

The first recreational marijuana retail shops in Colorado are expected to open around Jan. 1, 2014.

All retail marijuana shops must use the Marijuana Inventory Tracking Solution (MITS) to ensure its inventories are identified and tracked from the point they are transferred from a cultivation or manufacturing facility through the point of sale.

All edible marijuana products may include no more than a total of 100 milligrams of active THC, the chemical in marijuana which causes the “high” sensation.

Retail marijuana dispensaries must prohibit the consumption of marijuana or marijuana products on the premises.

Marijuana must be placed in special child-resistant packages, designed to be significantly difficult for children under five years of age to open, before it is removed from the dispensary. The packaging must also be opaque “so that the product cannot be seen from the outside of the packaging” and labeled properly.

Retail marijuana shops cannot advertise where minors are likely to see the ads on television, radio or newspapers unless “no more than 30 percent of the audience” is “reasonably expected to be under the age of 21.”

The retail marijuana rules do not limit the ability for local law enforcement to investigate unlawful activity in relation to the marijuana shop.

Colorado adults, 21 and over, will be limited to purchasing up to an ounce of marijuana for recreational use from specialty licensed retail shops that can also sell pot-related items such as pipes and accessories. Coloradans can also grow up to six plants — with only three flowering at a given time — in their home for personal use.

Adults can possess up to an ounce of marijuana legally.

The United States government took a historic step back from its long-running drug war in August, when Attorney General Eric Holder informed the governors of Washington and Colorado that the Department of Justice would allow the states to create a regime that would regulate and implement the ballot initiatives that legalized the use of marijuana for adults.

On Tuesday, the DOJ’s Deputy Attorney General James Cole told Congress that financial institutions will be able to conduct business with the legitimate marijuana industry without fear of prosecution.