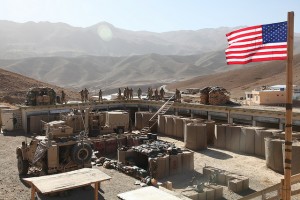 Taliban fighters wearing special forces’ uniforms have attacked a car park for NATO vehicles at a US military base in an Afghan province bordering Pakistan.

More than 30 vehicles stationed at the base before heading to Pakistan were torched or damaged as a result of early Monday’s attack, which was followed by a gun battle between the fighters and security forces, at the Torkham border crossing in Nangarhar.

NATO-led ISAF forces said they had killed three attackers while none of its personnel were killed.

NATO helicopters were also said to have engaged with Taliban fighters on the ground.

The Taliban, which claimed responsibility for the attack, said six soldiers were killed and 10 military vehicles destroyed.

In an emailed statement to media offices, Zabiullah Mujahid, the Afghan Taliban spokesman, said the group was behind the attack, and claimed that its fighters had destroyed several tanks in the process.

The Afghan police shut part of a highway that forms an important route for NATO supply lorries travelling between Jalalabad, Nangarhar’s capital, and Torkham, a district adjoining Pakistan.

The attack comes exactly a week after the Afghan President Hamid Karzai’s visit to Pakistan, where he discussed the peace process including the release of jailed high-level Afghan Taliban members.

Taliban fighters on both sides of the Afghan border have frequently targeted the supply line, leading NATO to shift much of its supply delivery towards routes from Central Asian states instead of through Pakistan.

The Taliban has escalated its attacks in recent weeks, a surge that comes as most of the US-led foreign troops are due to leave the country this year in advance of a full withdrawal by the end of 2014.