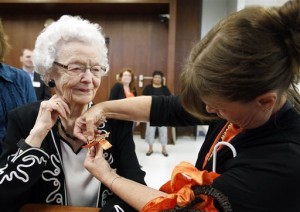 WATERLOO, IOWA — A 99-year-old Iowa woman who dropped out of a high school more than 80 years ago despite needing only one credit to graduate has finally received her diploma.

Audrey Crabtree, of Cedar Falls, smiled Monday as she received an honorary diploma for her time at Waterloo East High School.

“And I feel so much smarter,” Crabtree quipped.

Crabtree, who began her education at a one-room school house in northeast Iowa, left high school in 1932 due to a swimming and diving accident that forced her to miss several school days. She also had to care for her sick grandmother.

“I was a senior, but I was short a credit, so I would’ve had to go back the next fall,” she told the Waterloo-Cedar Falls Courier.

That would have interfered with her plans to marry her first husband. In 1957, the couple bought the flower shop where Crabtree had worked after their two children started school. But her husband died of a heart attack two months into their business venture.

Despite Crabtree’s professional and family success, those around her had noted her

dissatisfaction with not finishing school.

“She had voiced quite a while back the one regret she had in life was that she never had gotten her diploma,” said Shelley Hoffman, Crabtree’s granddaughter.

Family and friends surrounded Crabtree as the current principal of East High handed her a diploma during an education board meeting.

“I wouldn’t advise anyone to drop out,” she said. “I just have to say in my life the Lord has been so good.”

Crabtree was given a copy of her last report card and memorabilia from her time at the high school, including a jacket and homecoming pins. She also received more than 100 handmade congratulatory cards from middle school students.