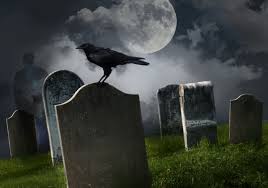 Hopefully, meeting your loved one in a graveyard comes after a long relationship.

In the case of self-proclaimed goth Lauren Anderson, the relationships started in a graveyard. But the morbid meeting was appropriate, given that both were goths growing up in a Connecticut town.

“I lived on one side of the [cemetery] and he lived on the other, and I’d drive by this big house all the time and I’d hear this great music coming out of it,” Anderson told HuffPost Live on Friday. “Over and over, we missed each other because he would hang out [at the graveyard] with his friends, and I would hang out there with mine.”

Eventually, fate pointed its black-polished fingernail at the two of them.

“One day, it was just fireworks,” she said. “He had on these striped stockings, and long black hair. He’s so perfect.”

Anderson, who currently works at Gothic Renaissance, a New York-based boutique store for goths, insists she didn’t get into the lifestyle as a way of rebelling against her parents.

Far from it. She comes from a long line of pagans and goths, including her mom, who was writing Anne Rice-inspired fan fiction back in the 1980s.

Contrary to conventional wisdom, Anderson doesn’t consider herself to be tormented either — despite an appearance that some might consider extreme.

“I’ve been very happy for most of my life,” she said. “But I think my creative parts fulfill me.”

Anderson’s happiness doesn’t seem to fade, even when she leaves New York to visit her mom — who now lives in Indiana — and the more conservative citizens react to her extreme appearance.

“Some people call me ‘anti-christ’ and pull their children out of the way,” she said. “Whatever. Life’s a party.”