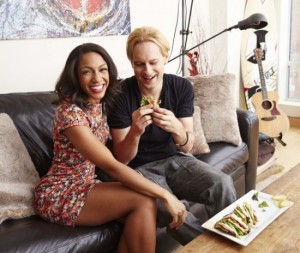 New York Post journalist, Stephanie Smith, truly believes the way to a man’s heart is through his stomach. After her boyfriend told her she is 300 sandwiches away from an engagement ring, Stephanie got cooking and started a blog to document her progress. She is currently at sandwich #176.

Stephanie says her relationship to her boyfriend, “Alexander Skarsgård look-alike” Eric, has always been centered on food. They met at a restaurant, he cooked her dinner on their second date, and they’ve hosted numerous dinner-parties together, so she knew how important food was to him. And there was nothing he liked more than sandwiches. “To him, sandwiches are like kisses or hugs. Or sex,” the young journalist says.

The two New-Yorkers had been going steady for about a year and even moved into a cozy apartment together, but Stephanie was wondering what it would take for Eric to finally pop the big question. She found the answer one day, after she made him her her first a turkey on whole wheat bread, with mustard, lettuce and swiss cheese. “Honey,  this is the best sandwich ever!” Eric told her in between bites. When he was done, he dropped the bomb on her: “You’re, like, 300 sandwiches away from an engagement ring.” That was it, the secret to the marriage proposal she had been dreaming of. Stephanie didn’t really know hot to cook, but she was willing to learn and she wasn’t one to back down from a challenge.

Smith’s friends weren’t exactly supportive of the idea. “How ‘Stepford Wives’ of you!” one of her single girlfriends said, while another told her “It’s not 1950! It’s chauvinistic! He’s saying, ‘Cook for me, woman, and maybe I’ll make you my wife.’” Even her own mother had some doubts. “Honey, can you even cook?” she asked. But Stephanie wasn’t going to let all the negativity get between her and her goal. Plus, she didn’t share her friends’view of the whole situation. “Some say I’m just desperate to get engaged. Hardly. I don’t have to be,” Stephanie writes on her 300 Sandwiches blog. “Eric didn’t say ‘cook me 300 sandwiches or I’m leaving you!’ He gave me a challenge—a dare, to some degree—and the type-A, Tracy Flick side of me can’t stand being challenged. I will prove to him and the rest of the world I can make the 300 sandwiches.”

She started the 300-sandwich-challenge with an easy ice-cream sandwich and moved on from there, but at about ten sandwiches into the project, she realized things were moving at a slow pace. She was already in her mid 30′s and making just three sandwiches a week wasn’t going to wing her the engagement ring too soon. “How would I finish 300 sandwiches in time for us to get engaged, married and have babies before I exited my childbearing years?” she asked herself. So the young journalist stepped up her game, making snacks for breakfast, lunch and dinner and whenever she wanted to get herself out of the dog house.

So far she has cooked 176 different sandwiches for Eric, and learned a whole lot about food in the process. Her creations have grown more complex with each month, but Stephanie says her boyfriend smiles and says “thank you” regardless of what’s on the menu. “You women read all these magazines to get advice on how to keep a man, and it’s so easy,” he told her. “We’re not complex. Just do something nice for us. Like make a sandwich.”

After she posted an article about the project in the New York Post, Stephanie triggered a storm of negative reactions from feminists all around the world. But the couple say some people have taken the whole thing too literally, and that the blog itself was only meant “as a lighthearted joke between boyfriend and girlfriend”. “I presented it to the world because I thought at least one person would find the humor in the idea of sandwiches for an engagement ring,” Stephanie said.

Stephanie says that the experience has brought her and Eric closer together. They enjoy doing the groceries together and planning dinners, and although Smith still wants a ring on her finger and live happily ever after, she says she has put a lot less pressure on the 300 sandwich race, instead enjoying every moment they spend together cooking.