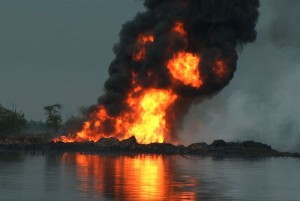 Officials of the Petroleum and Pipelines Marketing Company, PPMC, were battling to put out the fire ignited by the explosion as at 6.30 pm, but they disputed the claim that two persons died. They however confirmed that two pick-up vans of the company were burnt in the fire disaster.

A source said the explosion was caused by pipeline vandals, but a villager said the pipeline sparked fired as PPMC officials were effecting repairs on a ruptured section.

The fire was said to have started at about 3.30 pm.

“They were roasted like chickens. I wonder what they were doing near a gas pipeline. Our people don’t learn from the mistake of others and what they hear. As I speak with you, they are being rushed to the hospital.

“I was on my way to Sapele when suddenly I saw a thick smoke ahead of me and by the time I got nearer, I saw that it was pipeline explosion,” the source said.