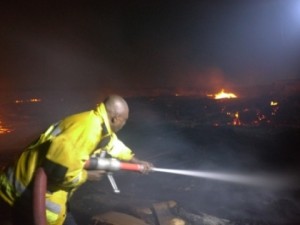 Although no life was lost in the inferno, about 48 shops were completely burnt down, while 38 others were said to be partially damaged.

According to eyewitnesses, the fire started at 9.30p.m., from a power generating set kept close to a cooking area in the market.

It was learnt that the property destroyed in the incident were worth millions of naira, before a combined team of police and fire service men from Alausa and Ikeja area of Lagos put out the fire.

Confirming the incident, Director of Lagos State Fire Service, Mr. Rasaq Fadipe, said that the call came in at 21:21 p.m. on Sunday.

“Two water trucks of 10,000 litres each were deployed to combat the fire. 48 shops were razed by the fire, while 38 were only mildly affected.

“Several goods, I cannot say the worth, were burnt because this is a general market. They sell different goods,” Fadipe said.

He also lamented the reaction of the residents, saying “they delayed the firefighters. When we arrived at the scene, we discovered that the residents were trying to fight the fire with water from the drainage channel.

“We had to beg them before they could leave the scene for us to tackle the fire.”