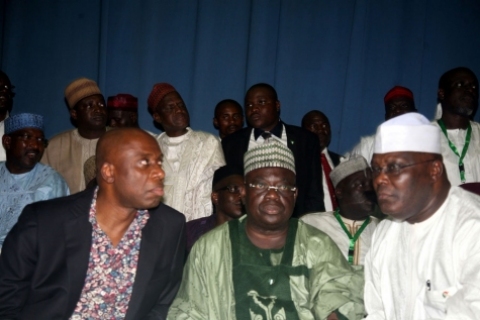 The leadership of the Abubakar Kawu Baraje-led New Peoples Democratic Party has said the Governor of Niger State, Dr. Babangida Aliyu, is still a member of the faction and among the group of seven (G-7) governors opposed to the Bamanga Tukur leadership of the party.

The group also debunked the report that the governor had dumped the faction, saying it was a ruse.

National Publicity Secretary of the New PDP, Chief Chukwuemeka Eze, in a message on Tuesday in Abuja, said that the chairman of the faction, Mr. Baraje, had spoken with the governor and received assurances that he remains committed to the group’s cause.

He said, “The first thing we did this morning when we read the report (not in The PUNCH) was to contact the governor through Baraje and according to the Chairman, the governor vehemently denied and refuted such an absurd and false report and assured us that he will be the last person to leave the G-7 governors particularly now that our struggle to reposition the PDP is about to yield the desired result.

“To us, this is just one of those evil machinations by failed politicians on the side of Bamanga Tukur’s faction to cause disunity in a group that God in answer to the prayers of Nigerians, brought to restore hope back to our dying democracy.

“We will like to assure Nigerians that this is a fight we shall see to its logical end not minding all the evil plots against us as a group”.

He added that the faction was selective of its leadership, which he said, was constituted by “very patriotic” Nigerians desirous of building a new nation.

Eze added that the Niger State governor was among those in this group, who according to him, are ready to champion the struggle, adding that with  Mr. Aliyu’s commitment, there was no way he (Aliyu) would dump the group.