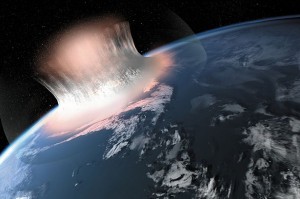 Scientists have found a 1,300-foot asteroid heading for Earth that could wipe out mankind in 2032.

Asteroid 2013 TV135 was discovered moving through the Camelopardalis constellation by scientists at the Crimean Astrophysical Observatory in southern Ukraine last week.

It has been rated as one of the two most dangerous ever recorded – but even so the odds of the object hitting the planet are slim.

The blast would be 50 times greater than the biggest nuclear bomb and could damage more than 100,000 square miles.

Gennady Borisov, who discovered the asteroid, said: “I was watching the Giraffe constellation, it was an in-depth monitoring as part of the comet search program. This is when the asteroid… was discovered. The first observations show that it moves quickly and is relatively close.”

According to the Russian news agency RIA Novosti, if the asteroid misses it will still pass within 1 million miles of Earth’s orbit.

That’s a little too close for comfort – and so Nasa have deemed it “potentially hazardous.”

The object will be better examined by scientists in 2024, when it is closer and its orbit and potential impact zone can be analysed.

Another similarly hazardous asteroid is the 2007 VK184, which is believed to have the likelier chance of hitting the planet. However, it is much smaller 420-foot wide and is still reported to have a 1 in 2700 chance of striking Earth in 2048.

Space agencies, including Nasa, continually monitor for space objects which may pose a risk to Earth.

Last year an asteroid as large as an Olympic swimming pool raced past the Earth at a distance of just 27,700km (17,200mi) – the closest ever for an object that size.

The head of NASA revealed that the best way to handle a large asteroid heading for Earth… is to PRAY.

Charles Bolden told Congress that prayer was all the experts or anyone else could currently do about asteroids that may be on a collision course with the planet.

Over 1,500 people were injured when a meteor exploded over Chelyabinsk, Russia, last month – generating shock waves that shattered windows and damaged buildings.