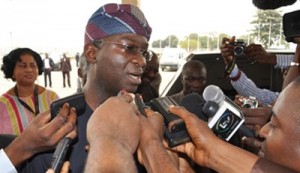 Lagos State Governor, Mr. Babatunde Fashola, has slammed the administration of President Goodluck Jonathan for its plan to mark Nigeria’s 100 years anniversary in 2014, stressing that it was a proposal which might distort Nigeria’s history.

The governor also condemned the resort of some aggrieved groups “to violence and threats as a way to resolve our differences.”

While delivering an address to mark the country’s 53rd independence anniversary at the Police College, Ikeja, Fashola expressed concerns over the planned 100 years celebration of Nigeria’s statehood.

Fashola questioned the plan by the federal government to mark a centenary of the country’s existence, a day which he said, had never been celebrated either before Nigeria attained independence or after.

He argued that the unity of Nigeria “is driven by its diversity and the competitive productivity that can come from it. But as far as centenary is concerned, Nigeria was born an independent sovereign country on October 1, 1960.

“Perhaps, Nigeria was conceived in 1914. But as we race towards this, it is important not to distort history. I will seek better understanding and better explanation by those who are behind the centenary celebration.

“If we rolled out the drums three years ago to celebrate 50 years of Nigeria’s nationhood, independence which our nationalists fought for and people went to jail for, what then is this centenary all about? How did they come about it?

“I do not remember as a child ever coming out at amalgamation day. Suddenly, how did we get to 100? Did we celebrate 99? Did we do 50? Did we do 60? There is something wrong here. I do not know, but I will want some clarifications. A generation is coming behind us; they need to be clear about the history of our country.”

The governor added: “As I said, maybe the conception of Nigeria took place in 1914, but it is the birthday, the date of birth of a child that we celebrate and I think that that birthday is October 1, 1960. This country has gone through its fair share of adversity, but today, what is important is that through it all, we are still standing as one.”

Fashola also expressed optimism for the future of Nigeria in spite of various challenges facing the country, noting that he remained inspired by the fact that Nigerians continued “to repose their faith in this country.”

Fashola therefore commended the spirit of resilience, which he said, propelled his countrymen “to always forge ahead in the face of all odds. At the last anniversary, we have made a lot of progress in the state because progress in the areas of public service is how you measure the success of true independence and democracy.”