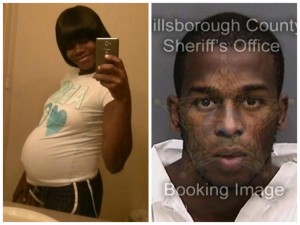 Doctors have delivered a healthy baby after its mother was shot and later died in a suspected case of domestic violence in Florida.

Briana Anderson, 22, was in her third trimester when her baby was delivered by C-section at Tampa General Hospital late Wednesday night, according to the Tampa Police Department.

The mother to a 3-year-old boy was placed on life support and died, but not without a fight by paramedics who say they were able to briefly revive her while en route to the hospital, BayNews9 reports.

Police say a 911 call was placed from Anderson’s apartment around 4 p.m. before they found the critically injured mother after she was shot in the head.

Neighbors tell the TV station that her young son was at the scene and was seen sitting on the street outside the apartment, visibly upset.

When officers tried to stop the vehicle Silas was a passenger in it refused to stop and sped off according to police.

The following police car responded by hitting the backend of the vehicle, causing it to spin to a stop. No one was injured in the maneuver according to police.

Silas, who has a lengthy arrest report, is expected to faces charges including being a felon in possession of a firearm.

Police say Anderson’s family was able to say their good-byes to her in the hospital and will donate her organs.

A Facebook page belonging to Anderson captures her excitement during her expected birth to what she reveals to be a girl.

Several photos show a boy she describes as her son smiling as he leans into her stomach with a kiss. An accompanying caption reads: “he love & ready for his little sister!!”

Another photo posted in May shows a sonogram which she describes as being a girl.

The father of either of her two children was not identified by police.