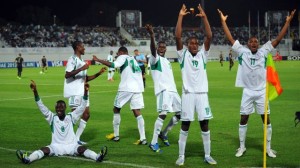 A Nigerian soccer fan living in Dubai has died after watching the Golden Eaglets hold Sweden to a thrilling 3-3 draw at the Kalifa Bin Zayed Stadium in Al-Ain City, UAE, in the ongoing FIFA U-17 World Cup.

Eyewitnesses said the fan, whose name is yet to be confirmed from the Dubai police and hospital, died yesterday, in the bus conveying the Nigerian fans contingent back to Dubai, after suffering cardiac arrest after the game against Sweden.

He was said to have been rushed to a Dubai hospital for treatment, where was until he passed on in the early morning of yesterday.

His corpse was deposited in the morgue of the hospital.

The deceased was until his death, a businessman in Dubai.