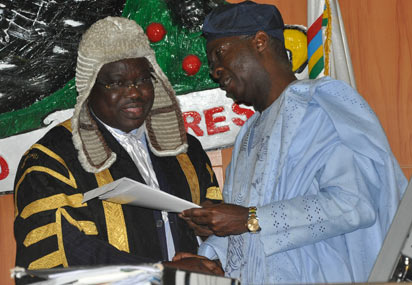 Governor of Lagos State, Babatunde Raji Fashola (SAN) yesterday presented a 2014 budget estimate of N489.690 billion to the State House of Assembly for consideration and approval.

Presenting the 2014 budget estimate before a large audience of stakeholders including party chieftains and captains of industries, Fashola noted that the proposed budget was about N10 billion shy of the 2013 budget (as amended).

He said the budget has N234.665 billion as recurrent expenditure and N255.025 billion for capital expenditure.

Similarly, the Housing and Community Amenities sector got N50.537 billion; Health was allocated N37.8 billion; Recreation, Culture and Religion got N3.482 billion, while N77.423 billion and N2.466billion are devoted to Education and Social Protection, respectively.

Fashola explained that due to the fact that this is the last full year budget that his administration would implement, as he would be handing over the mantle of leadership in 2015, there’s a slight reduction in budget size when compared with the 2013 budget, stating that its focus is “to complete on-going projects, and consolidate on the gains we have made.”

“One of our programmes that we will be paying attenition to is the Residents’ Registration exercise. As I said at the launch, it is for Residents of Lagos and no more. It seeks to register everybody who intends to live here for up to 6 (six) months and beyond, irrespective of where they come from,” he stressed, adding that “with effect from the 1st of December 2013, it will be a requirement in terms of information to be provided in order to enable us to provide service to you or process requests from you.”