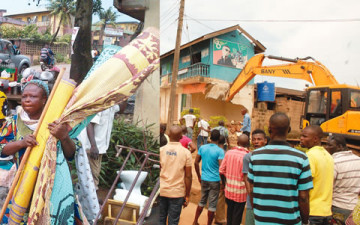 Residents of Ogun State have been advised not to view the demolition of buildings for the ongoing road expansion projects in the state as targeted at individuals or groups.

The state Commissioner for Works, Lekan Adegbite, who gave the advice while conducting journalists round the 32km Sango-Ijoko-Agbado-Akute-Ojodu road project on Monday, disclosed that five buildings belonging to the state governor, Senator Ibikunle Amosun and members of his immediate and extended families, have been leveled in the demolition exercise and pleaded with all those affected to exercise patience with the state government

“People should please show understanding towards this exercise. Look, in Abeokuta, the governor lost about five buildings. People thought he was crazy, but, now they have realized his mission and they are appreciating it. We should please not attach any sentiments. For instance, the bridge we are about to construct here at Yakoyo (in Ojodu) cannot be completed if we do not pull down buildings. Past governments, for fear of stepping on toes failed to take the bull by the horn”, he said.

The commissioner also urged owners of affected buildings to come forward with relevant documents for compensation, just as he expressed surprise at the insinuation in certain quarters that the Amosun-led administration was embarking on the project to score a political goal.

“I cannot understand such thinking. We promised to embark on this project shortly after this administration came into power, so what is the politics there”, he said.