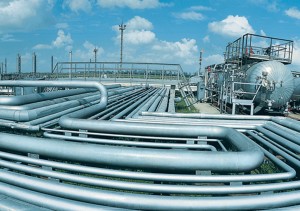 The Nigerian National Petroleum Corporation, NNPC has said that the massive ongoing gas pipeline projects across the country will provide a veritable platform for individual homes and estates to be linked with gas pipelines to enhance domestic use.

Speaking at a a panel discussion on power at the Nigeria Investment Summit in New York, Group Managing Director, NNPC, Mr. Andrew Yakubu, who was represented by the Group Executive Director Gas and Power, Dr. David Ige, noted that gas provides cleaner and safer energy for households, adding that already, the SPDC Estate in Warri, Delta State, is fully wired up with gas for domestic use.

He observed that the ongoing Calabar-Ajaokuta-Kano gas pipeline project will soon avail the Corporation the opportunity to provide gas through pipelines to homes and estates in the Federal Capital Territory Abuja, which is a ready market for the project.

Giving an update on the gas to power project, Yakubu noted that steady and sustainable progress is being made in this regard, as gas supply has grown from 620 million standard cubic feet per day to 920 mmscfd between 2010 and 2013, adding that supply is seeing rapid growth, and demand even faster.

“Supply grew at an average annual rate of 20% in the last three years to 1500mmscfd.The non-power sector has almost doubled from 185mmscfd to 310mmscfd.Similarly, over 360km of gas pipelines have been completed and commissioned,” he said.

The NNPC boss also projected that by the second quarter of 2015, gas demand for the power sector will grow to 2200mmcfd, adding that with the massive outlay of pipelines, the NNPC will continue to grow gas supply exponentially to meet the demand.

Accordingly, Yakubu maintained that the power sector will witness significant improvement in gas supply over the next two to three months, which will in turn improve the electricity situation in the country.

The NNPC boss also listed other gas supply projects that are ongoing and are at various levels of maturation from 2015, the biggest being Assa North with a target capacity of 750mmcfd by end of 2018, adding that the total incremental additions by end of 2018 will be 2150mmcfd.

He implored prospective investors to invest in the multi-billion dollar Ogidigben Industrial Park, which offers investment opportunities in petrochemical, fertilizer, methanol and other non-oil sector of the Nigerian economy which he described as the choice destination for quick return on investment. [Vanguard]