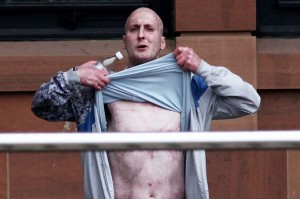 Suicidal Michael McStay changed his mind after filling his flat with gas – but then lit a cigarette.

The blast blew apart the building leaving the 39-year-old in hospital for 12 months. Now he has been jailed for arson.

A court heard McStay was feeling suicidal and ripped a gas pipe off its mounting to try to kill himself.

But he changed his mind and opened the windows to let the gas out.

Then, McStay then lit up a cigarette, blowing the roof off his upstairs flat and causing £270,000 of damage.

He suffered catastrophic burns all over his body, spent three months in a coma, 12 months in hospital and has had 30 operations with more to come.

He was jailed for 27 months after pleading guilty to arson at Newcastle Crown Court.

Sentencing him, Judge Jeremy Freedman said: “It was your intention to take your own life but you thought better of it and you opened the window and somewhat naively believed the gas would then escape.

“What you then did, as an act of folly, is light a cigarette and the inevitable happened. There was what can only be described as a massive explosion.

“There could have been three fatalities here. Your downstairs neighbour, his son and you were lucky to escape alive.”

The father and son downstairs in Elswick, Newcastle-upon-Tyne were woken by a huge bang in the early hours of the morning in September 2011.

They ran into the back yard and saw a scene of destruction.

Michael Bunch, prosecuting, said: “They could see flaming items falling in the yard, which was full of bricks and rubble.

“When they looked up they could see the roof and wall from the defendant’s flat had been blown off.

“The defendant was crouching down in the area where his kitchen had been.

“He shouted: ‘I’ve blown myself up,’ and had suffered horrific burns.”

McStay suffered 65% burns and was a hospital in-patient for a year and has been left horribly scarred.

The court heard the flat downstairs and properties to the side in the terraced block were damaged in the explosion and the total repair bill was £270,000.

McStay, who has convictions for 27 previous offences, pleaded guilty to arson being reckless as to whether life was endangered.

Paul Caulfield, defending, said: “The explosion for him has been catastrophic. “He was in a coma for three months, his heart stopped three times and he has had 30 operations, with more to come.

“His hands are clawed and virtually useless, his feet are extremely badly damaged and he is on heavy pain killers and has not slept properly for two years.

He has served the equivalent of a two year prison sentence during his time in hospital.”