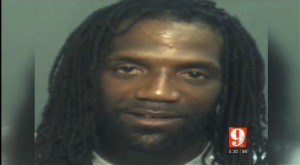 Here’s a tip for potential reckless drivers: If you’re going to tell officers you don’t smoke marijuana, make sure there are not pot chunks in your beard.

Johnny Lee Fisher, 35, allegedly made that mistake last Sunday after he was stopped by state troopers in Orange County, Fla., WESH-TV reported.

Fisher was reportedly so reckless on the road that officials were forced to use a pit maneuver on his SUV. That’s a method where one car pursuing another forces the pursued vehicle to abruptly turn sideways to the direction of travel, causing the driver to lose control and stop.

Fisher’s car turned over and authorities dragged him out, before questioning him.

“You don’t smoke marijuana?” one trooper asked, according to surveillance video obtained by WFTV-TV.

“Can I ask you a question then? Why is there marijuana in your beard?” the trooper said.

In addition to having weed-filled whiskers, officials said Fisher smelled of alcohol.

However, as Right This Minute host Steven Fabian noted, the police report did not mention how much of it was found in Fisher’s beard.