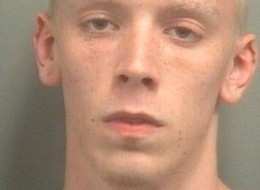 Apparently, some parents will do anything for their kids, even drive the getaway car when he allegedly robs an elderly man in a Walmart parking lot.

Officials in Palm Beach County, Fla., arrested Jesse James Dillen, 20, on Tuesday after he allegedly stole a wallet from 78-year-old Arthur E. Nieding, outside a Walmart in Greenacres, Fla.

Nieding told police he was about to open his car door when the suspect ran up behind him, pushed and took his wallet, which contained $40 plus credit cards.

Surveillance video shows a man later identified as Dillen exiting a white Kia SUV, then striking Nieding and fleeing towards a Starbucks, the Palm Beach Post reported. Detectives later tracked down the car and found Dillen inside with his mom, Anne Negron, behind the wheel.

At first, Negron denied any involvement but later told investigators that Dillen ran up to the SUV with a wallet after robbing a man and that the wallet was later thrown away, the Orlando Sentinel reported.

Dillen faces charges of robbery and elderly abuse, and is currently being held on $30,000 bond. Negron has not been charged.

A man who said he was Dillen’s father and Negron’s husband told TV crews that his wife is innocent.

“There’s a few things I’d love to say, but the police are here and I can’t,” the man said, according to WESH-TV. “She got nothing to do with it. You guys saying she’s (expletive) covering for (my son).”

A reporter from another station, WPBF-TV, asked the man if he’d like to tell his family’s side of the story and his response led the police to get involved.

“Go to my house. See what happens there,” he told reporters.

“Please do not make threats, sir,” a detective warned him.

“I didn’t threaten him,” the man countered.

“It sounded like a threat to me,” the detective said.