Not many people knew much about Pastor John Adewale Adedokun and his Christ Apostolic Church, located in Cannan Land district, Olowo, near Ore, Ondo State. However, it all changed on Friday, October 4, the day after the fatal Lagos Plane crash. 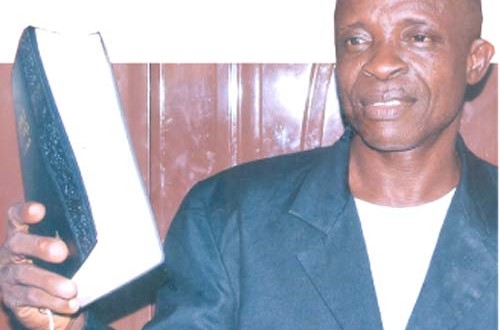 A week earlier, Pastor Adedokun had written a letter to the chiefs of Iju-Odo, hometown of late Dr. Segun Agagu, warning them of an impending danger. He advised to hold a three-day revival programme in the town before the burial of the former Ondo State governor. The chiefs heeded his advise, and a programme, themed “Forbidding Satan and cohorts in the land created by the God of our fathers,” started on Monday, September 30, and ended on Wednesday October 2, 2013.

Early Friday, Ocotber 4, the Pastor was bombarded with phone calls of people who thanked him for his advice. The plane carrying the remains of the former governor had crashed shortly after take-off, but no relations of Agagu died.

The Christ Apostolic Church church is located on a large sparse of land in a non-descript remote settlement along the Ore-Okitipupa road. The settlement, Olowo, is not known to many beyond Okitipupa, Ore and environ. But the church and Pastor Adedokun’s activities are fast putting the name of the hitherto unknown settlement on the map.

Dressed in a pair of shorts and a simple shirt, Prophet Adedokun speaks inside his church in Olowo, near Ore.

“We went to pray at the Olusooye Hill (Ori Oke Olusooye). It is located between Ifetedo and Garage Olode in Osun State.

“It was while we were praying that God told me to ask the people to pray fervently.

“God said they should have a three-day prayer and fasting session to avert an impending doom. He also said it that the programme should be done before the remains of the late Governor Segun Agagu was brought into the town. God specifically said bad people wanted to use the opportunity of the burial to cause more calamity to the people of Iju-Odo.

“We quickly did a letter to the chiefs, warning them of the danger. I am particularly happy that they heeded God’s warning.”

“You can ask anybody who attended the programme, my prayer point during the programme was that the people should pray to God that no other corpse, aside from that of the former governor, would be brought to the town.

“And God answered our prayers, because that programme aborted the plans of the wicked ones to cause more pain, not only to the Agagu family and the entire town, but to Ondo State and Nigeria in general.”

“What God told me was to tell the people of the town to pray against whatever evil the wicked might have in stock for the people. God specifically said the prayer should be that no other corpse would be brought into the town aside from that of the former governor. And that was what we did,” the Pastor explains.

“I don’t really know by what title you want to address me. But the truth is, that it is the God in me who is working. And like I told you, I simply do what God directs me to do,” the Pastor adds.

Born in Iragberi, Osun State, Prophet Adedokun spent his early years in faraway Ivory Coast where he lived with an uncle.

“Prophet Hezekiah Oluboye Oladeji, founder, CAC Canaan Land, Garage Olode, Osun State, is the one behind this ministry. It was him who God used to bring me into His fold. Prophet Hezekiah and I are like Elijah and Elisha. It was through him that I found God’s favour.

“I am the first of three children. I was taken away to Ivory Coast in 1967. I came back to Nigeria in 1977. Life was good, and I made money. But by 1990, I lost everything because I lived life as a non-believer…

“After that, my siblings tried to get me a job. But because I didn’t have any certificate, all they could get for me was security jobs. But I know that I am a strong man, so I opted to go into farming rather than do security job. That was how I started farming and also help people to harvest palm fruit.

“Between all this, I also served as a house help for some period. It was while I was doing this that I got to a settlement, called Kajola Ojurin. I finally settled there in 1997, and left in 2004. At that time, I was a member of The Apostolic Church.

“At a point, the pastor was transferred, and nobody was brought to replace him. One particular Sunday, I just decided that I would lead the congregation. I was doing this until one day when the Christian Association of Nigeria (CAN) requested for somebody to represent our church. The church decided that I should go. But don’t forget that I said I was a farmer, not a pastor. But I found favour before the leaders of our church, and they sent me.

“One day, we decided to hold a revival programme. So, as we debated on who to invite, we all agreed that it should be Prophet Hezekiah. We went to his church to inform him. The first time we met him was November 11, 2004.

“Meanwhile, I was still doing my farming work alongside the pastoral work. On the day the prophet came for the revival programme, it was like all his messages were directed at me. Though he did not know anything about me at the time, but all he said was about me. When I heard him, I started crying.

“But at a point, I heard him say that God asked him to shake hands with three people. I was lucky to be one of the three people who shook hands with him that day. Immediately after that, I clearly heard God talking to me about my salvation. God specifically told me not to go back to my house, and that I should leave that town immediately. He said if I obeyed His command, that I would fulfill what He sent me to do on earth. I tell you, from that crusade ground, I didn’t go back home. I left the town that day and came to Olowo, Ore, to meet my friend. That was how I got to this town.

“When he arrived at his new abode, he did not waste time to commence a threeday fasting and prayer that God ordered him to observe.

“I started almost immediately after I arrived at Olowo town. Interestingly, people started coming to me that I should pray for them. I did that for the next three days when a message came that I should tell the people, irrespective of their religion, to come together and pray to Him. God said if they did that, He would hearken to their cries. I did as ordered by God, and the people turned out in large number for the programme. The town head and the elders later asked me to stay and live with them.

“As a matter of fact, the first person to ever call me a prophet was the second-in-command of this town. And people started calling me by that name since then.

“I went back to the prophet three months after that encounter with him. And surprisingly, the moment I entered into his presence, the first thing he said was ‘Welcome, God’s prophet’.

“I later explained to him my experience since he shook hands with me. It was him that advised me to go ahead with the plan. And that is why our church is called CAC Cannan Land. You know that his ministry is called by that name.”

With little or no fund available to him, he lived on a bench under a tree for three years after he took possession of the land in 2005. But at this stage, his immediate family became very worried about him. They feared that he might be suffering from mental disorder, and came to take him away.

“But the first day they came to take me away, I was praying with some people. After they observed what was happening, my family decided to leave me alone.”

However, one particular thing about this time was that the people observed that whenever the man of God prayed, they got result. The church began to grow gradually, with the eight people present at the first service held in the church about eight years ago.

But the growth did not come on a platter of gold for the church and Pastor Adedokun.

“Don’t forget that I told you that when I arrived in this town, I had only a pair of trousers and three shirts. And for years, all we had was the forest. As a matter of fact, I kept warm by making bonfire with logs of wood, which must not be extinguished or else the cold would be too much to endure. It was tough.”

Eight years on, the fame of CAC Cannan Land, Olowo District, has grown beyond the little town. Last Tuesday, though not a Sunday, the church was filled with people, all seeking spiritual healings to various challenges. But the crowd does not appeal to the man of God.

“I am not fascinated by the crowd. I tell you, whenever a man of God tells you that he is happy to see a large crowd at his programme, he is definitely happy with the amount of offering he is expecting. Our main concern should be whether the people would go back home without receiving the healing they expected to get. That should be the concern of men of God.

“At the root of the problems facing us is the lack of leaders who would be selfless and would love their fellow man like themselves. There is too much greed among the people. They forget that whatever you acquire in life would come to an end one day. Mark it, if our people can begin to exhibit a bit of love for others, life would change for the better for us.”