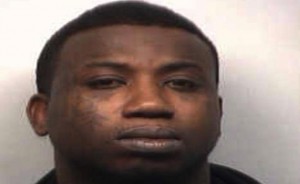 “There are 3 things to be on the lookout for; a black guy, who’s 6’6 and appears to be 5-7 months pregnant” Says Corrections Officer John Chambers who warns anyone who fits that description be reported immediately to their criminal hotline.

Rapper Radric Davis known as “Gucci Mane” was sentenced to 6 months in Jail September 30th after a string of crazy antics on and offline that lead to him being arrested on marijuana possession which unfortunately violates his probation.

“The last thing I heard before he knocked me out was burr and he said it 3 times REALLY fast; So I knew he meant business” Explained officer Randall Collins who was responsible for transporting Gucci Mane from county jail to prison where Gucci Mane was able to subdue him and make his escape.

If captured Gucci Mane faces an additional 5 years in jail and up to $250,000 in fines plus Grand Theft for the stolen police vehicle.