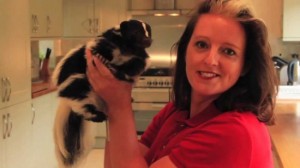 Like most people concerned about their eating habits and trying to lose weight, Alex Fontaine, an award-winning businesswoman, had tried virtually every diet ever invented. From hypnotherapy, acupuncture to “a flotation tank with whale music – which was lovely, but still didn’t do the trick,” you name it, she had tried them all, but with no real results. There had been no way of stopping Alex from reaching into her desserts cabinet and devouring everything in sight, until a party where she had a strong aversion to the bad smelling food she was served. Having rediscovered her brain’s behavior of associating food with smell, Alex managed to create an odor so foul that will instantly make you lose your appetite. With her Stick Yourself Slim fragrance and her beloved Sally the Skunk always by her side, Alex lost 10 kg and now wants to share her weight-loss philosophy with the world.

As you probably already guessed, the key ingredient of this perfume is the foul stench! It works by using the cool ability our brain has of associating bad odors with food that has gone bad. Our hunter gatherer ancestors often used this ability to determine which fruits and meats were safe to eat. Although we no longer use our olfactory system to determine how fresh and edible a morsel is, odors still govern our food likes and dislikes as well as determine our cravings for meals without even being hungry. With this principle in mind, Alex believes that with bad smells we can train out brain to reject fattening foods by making them seem undesirable.

Alex got this idea during a party where she was anxiously waiting to eat. When the plates arrived, an unpleasant smell forced itself into her nostrils making her lose her appetite. She had never rejected any kind of food before and realized it was the off-putting smell causing her loss of appetite. She then had a Eureka moment and soon began working on an ideally foul fragrance that would stop other people from over-eating just like it did her. Soon after, she met Sally the Skunk, her muse in creating the Stink Yourself Slim fragrance.

It took her 18 months and a lot of hard work to get the formula right for her new weight-loss miracle fragrance which would help people reject fattening foods but not linger around the house indefinitely. “Stink Yourself Slim provides enough of a deterrent without creating lasting unpleasant odors. It is best used in the home to train you to stay away from the “danger cupboard,” she explains on her website.