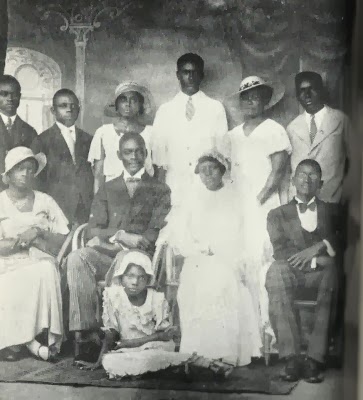 Nnamdi Azikiwe i the first President of Nigeria and remains a legend till tomorrow. Here is a picture of his wedding to his sweetheart and one-time First Lady of Nigeria, then Miss Flora Ogoegbunam in 1936. The wedding was held in James Town, Accra, Ghana. Hear what foremost historian, Max Siollun has to say about the late Zik of Africa: If Zik had killed himself, there would have been no Nigeria today – period. He more than anyone else (with the exception of Gowon) is responsible for the continued unity of Nigeria.

The wife died in 1983 and Zik himself later died in 1996. Actually, there was a time the great Zik wanted to commit suicide. In the words of Bimbola Babarinde, an expert on Nigerian history, Zik’s early years in America were so difficult and at one point he attempted suicide by lying across train tracks and waiting for an oncoming train to crush him. A good Samaritan saved his life by pulling him off the track with the train only a few yards from him. Life in America then for a lonely young African man was terrible, especially with all the discrimination, segregation and economic depression.

Also, he had other wives and his youngest wife might still be alive at his Nsukka Onuiyi residence. One of them, Professor Uche Azikiwe is still alive and is a lecturer at the University of Nigeria, Nsukka, Enugu State. Flora had four children for him (three males and one female), the eldest son is named Bamidele and Uche has two. There was also another late wife named Ugoye who also had two. And a child born out of wedlock from an English woman, the child was named Jayzik and is dead. Zik also had a child named Nnaemeka with a woman named Ms. Nelly Krupp, later Mrs. Mike Ibru (I am guessing that should be Jayzik because this same Nnaemeka died a year or two ago).

He was a ladies’ man and while at Yaba, he was well-known among the female folk. He had eyes for good-looking ladies and his youngest wife, Uche was a member of the renowned Afikpo traditional dance named ‘Nkwa Nwite’ which entertained him when he visited Afikpo. Zik set his eyes on her and today, the rest is history…lo