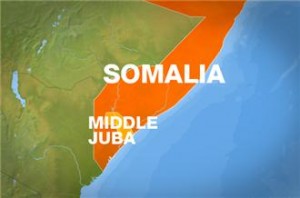 A US military strike has hit a car carrying senior members of the al-Shabab armed group in Somalia, killing at least two people including the group’s chief explosives expert, Ibrahim Ali, according to local Somali and US government sources.

Preliminary evidence collected by the US military indicated that Monday’s attack in Somalia’s Middle Juba region, killed its intended target, Ali, an explosives specialist known for his skill in building and using homemade bombs and suicide vests, the New York Times reported quoting a US Defence Department official.

“He’s been identified as someone we’ve been tracking for a long time,” the official, who spoke on the condition of anonymity because the mission was conducted by the military’s Joint Special Operations Command, told the US newspaper.

An al-Shabab member who gave his name as Abu Mohamed said one of those killed in Monday’s attack was al-Shabab’s top explosives expert, known as Anta.

He said a drone fired at the car in Somalia’s Middle Juba region.

It was not clear how Mohamed would know it was a drone strike, except that he said no attack helicopters were seen.

According to witnesses at the scene, both fighters killed were Somali men.

“It was after afternoon prayers between 1:30pm and 2pm when I heard a loud bang. Just one big bang,” a witness from Jilib told Al Jazeera.

“I came to the scene shortly after. I saw two dead bodies. Then al-Shabab fighters came to scene and took the bodies from the Suzuki vehicle. It was a drone strike.”

A Somali intelligence official in Mogadishu said the attack was launched as al-Shabab members went to intervene in a clan dispute.

The official insisted on anonymity because he is not authorised to share intelligence.

Although the US does not report its activities in Somalia, drones have been used in recent years to kill Somali and foreign al-Shabab fighters.