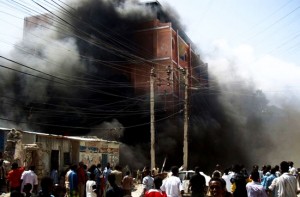 A car in southern Somalia has been hit by a suspected US drone strike, killing two fighters from the armed group al-Shabab, witnesses said.

The men were the only occupants of the vehicle and no one else was harmed, they said.

Witnesses blamed the United States, which has carried out drone strikes in Somalia before, for the attack.

Four witnesses at the scene confirmed the strike to Al Jazeera and said that both fighters killed were Somali. The rebels are known to have foreign fighters in their ranks.

The witnesses said the strike happened near the town of Jilib, 114km north of al-Shabab’s former stronghold of Kismayu. Jilib is the most populous town in the horn of Africa nation’s Middle Juba region.

“It was after afternoon prayers between 1:30pm and 2pm when I heard a loud bang. Just one big bang,” a witness from Jilib told Al Jazeera.

“I came to the scene shortly after. I saw two dead bodies. Then al-Shabab fighters came to scene and took the bodies from the Suzuki vehicle. It was a drone strike.”

Earlier this month, US forces carried out a dawn-raid on an al-Shabab base in the town of Barawe, killing one of the group’s fighters.

In September, al-Shabab launched an assault on a shopping mall in Nairobi, the capital of neighbouring Kenya, which left at least 67 people dead. [AlJazeera]