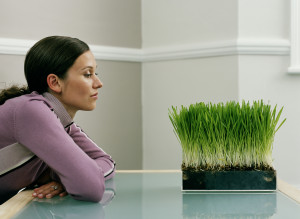 Helen Southall has a job that’s as interesting as watching grass grow – because that’s exactly what her job is.

“The green-fingered Brit earns her crust by watching grass grow,” The Daily News reports. “The seed analyst spends her days planting samples and making sure blades are rising to the right length.”

Typically, when Americans think of people getting paid to grow grass, it conjures up an image of an illegal hydroponics operation from some guy named Moonjive. But in this case, Southall’s employment is far less nefarious: She works with green grass — the same stuff grumpy old men tell kids to stay off of while they shake their fists in anger.

Though she admits that some parts of her job are tedious, her gig isn’t exactly garden-variety. As a seed analyst, she focuses on which types of grass grow to the right length in the most efficient manner. Still, sign spinners across the country must be baffled that there’s a job out there that requires even less effort than theirs.

Though the gig sounds about as legit as a Craigslist’s posting that says, “MAKE $$$$$ DOING NOTHING!!!!” this a true career for Southall. According to the article, she finds her job “rewarding” and “fascinating.” That’s great for her, though typically those words are more often used to describe the job of a cancer researcher than the job of someone who plays with a soil for a living.

The report fails to mention how much green she’s actually making — financially or otherwise — but for some of us, there’s not enough money in the world to make this seem like an interesting career choice. Now go back to sifting through that backlog of spreadsheet data like a normal person.