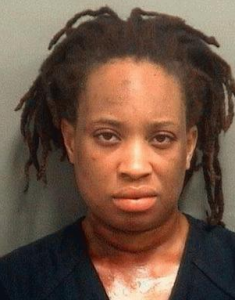 Domestic disputes in which men are the victim have become prevalent as of recent. As previously reported, one woman clawed the inside of her boyfriend’s mouth for refusing her sεex; another woman was arrested for ‘violently’ grabbing her boyfriend’s pεenis after he expressed his interest in ending the relationship; and lastly, a woman stαabbed her husband in the gluteus maximus for coming home late.

Adding to the list of women who have resorted to violence to handle disputes in their relationship is 34-year-old Vercelyn Mann. Mann and her boyfriend decided to enjoy popcorn and a movie at home when an argument erupted over a seat on the couch.

As Mann abandoned her seat to get the popcorn, her boyfriend occupied the seat. Mann became enraged and stαabbed her boyfriend in the thigh with a kitchen knife, destroyed three flat-screen TVs, furniture and two windows on her boyfriend’s car, according to a local news report.

A deputy came to the couple’s home in Delray Beach, FL at 1:13 a.m. Upon their arrival, officers said they heard things breaking inside. When it was all over, the deputy estimated that Mann caused more than $5,000 worth of damage. Mann faces aggravated battery and criminal mischief charges. She was booked into Palm Beach County Jail on Sunday where she remains without bail.