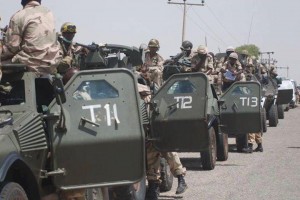 Following the killing of 40 students in a terrorist attack on College of Agriculture, Gujba, Yobe State, where students were shot dead in their dormitory, authorities are taking measures to improve security around schools, including stepping up patrols and putting armed soldiers outside them and guarding school buses.

The move, according to government sources on Monday, is aimed at restoring confidence in the Western style schools that have seen scenes of bloody massacres by Boko Haram militants who say western education is sin.

According to a presidency source, President Goodluck Jonathan met senior security aides, Sunday, to discuss how to respond to the latest deadly shift in tactics by the insurgents.

“At the meeting, they decided to provide special security cover for schools in the North-East and some other places prone to possible attacks.

“The president is not happy. He directed security chiefs to work out a new strategy so this doesn’t happen again,” the source said.

Mohammed Lamin, Yobe State Commissioner for Lower Education, speaking on the security measures noted; “For now, the state government has directed all round security surveillance on all schools across the state”.

He added that “the security agencies need to step up their operations to protect lives and property.”