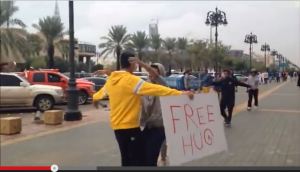 The country’s ultra-conservative police, tasked with enforcing the government’s Sharia law, arrested the duo for engaging in “exotic practices” and seized their “free hugs” banner, according to a Huffington Post translation of Arabic language newspaper Al Hayat.

One of the arrested, Abdulrahman al-Khayyal, posted a tweet earlier that day saying he would like to give free hugs in Tahliya, a bustling shopping street. He then took to the streets with a friend and a placard that read “free hugs,” the Independent reported. (The action is part of a social movement in which strangers offer others public embraces.)

After signing a pledge promising not to repeat the act, the two men were released. However, al-Khayyal told the Independent he would continue to give out free hugs because he saw it as an act of charity.

The outlet points out that the 21-year-old may have been inspired by a viral YouTube video (see below) that shows a man named Bandar al-Suwaid giving free hugs to young men in the same area the day before.

As the Agence France-Presse notes, not everyone was moved by the concept: “Today it’s one hug, tomorrow it’s a free kiss, and the next day it’ll be free sex!” one person tweeted.