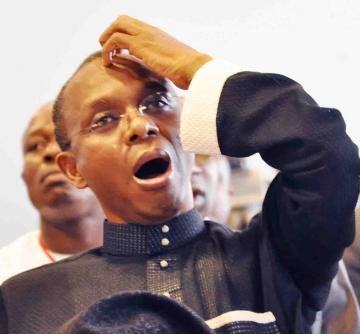 The member of the All Progressives Congress (APC) was reportedly barred from free movement.

“The DG-SSS did not pick my call, yet to call back. I have complained to another senior officer. It is unlawful detention and will be resisted!

“I intend to discharge my duties today no matter what, and will go out when ready. I will dare the SSS to shoot… we wait and see.

Further updates revealed that his phone was also seized: “In the midst of a phone interview with AIT’s Obiora Ilo, the SSS forcefully and unlawfully seized the phone thus abruptly end the interview.”

In a statement by Interim National Publicity Secretary Alhaji Lai Mohammed, the All Progressives Congress (APC) lamented the “continued harassment” of its Deputy National Secretary, Mallam Nasir el-Rufai by armed State Security Service (SSS) personnel, since he arrived at Awka on Friday night for the election.

According to the statement, el-Rufai has not only been restricted to his Finotel Hotel room where he is staying. The SSS officers took away his phone, as well as from all those dining at the hotel’s restaurant, presumably to prevent their pictures from being taken as they laid a siege on the hotel.

“These DSS personnel claimed to be acting on orders from above,” the statement read. “Whoever gave them the order, we in the APC believe it is illegal to prevent a duly accredited top official of a party involved in an election from moving around to monitor the election. He has a right to be at the election as our Deputy National Secretary.”

Furthermore, the party has raised the alarm over the fact that voting materials were delivered late, or not delivered at all the party’s strongholds. The defined such actions as “a deliberate attempt to disenfranchise the party’s supporters and make the election anything but free and fair.”

“As at the time of issuing this situation report, election materials have not yet arrived at Idemili North and South, Ogidi ward 1, Nkpor ward 1, Abatate, booth 012 of ward 2 Nibo and one booth at umunnakwe hall; There is no INEC or police presence at Obi Ilo Okoye polling unit in Awada, Onitsha; INEC register for 2011 were not brought to Palm Site Market 1&2; INEC is refusing to accredit voters in Awka South LG Ward 8; In Nnwei north Otolo ward 03, polling unit 14, only 6 people out of 77 were accredited and others couldn’t find their name; In Ward 8, Awka Government House, PDP agents are openly soliciting for votes in exchange for money, just as it is happening in Onitsha North Ward 100 and in CKC Adazi Nnukwu, and at Nteje Unit 004 in Oyi LG, APGA and PDP are negotiating how to share votes.”

The APC also indicated their members were harassed, and INEC guidelines violated. As an example, they cited a situation when a polling unit is situated right under the billboard bearing the pictures of APGA (All Progressives Grand Alliance) candidate Willie Obiano and his running mate in Aguleri.

“These are just a few of the examples of the shenanigans going on right under the nose of INEC, and we demand an immediate rectification so that no citizen will be disenfranchised, and so that all the parties will have a level playing ground. If this is not done urgently, the promise of a free, fair and transparent election in Anambra by the President and INEC would have been nothing but a ruse,” APC stated.