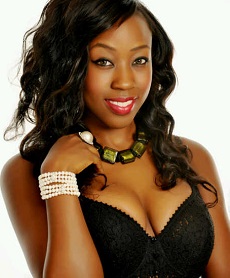 The fast rising Beverly Naya landed herself the role of Yaya on the primetime television series on DSTV-Tinsel.

According to Beverly:” “I was in the states shooting a TV series when I was contacted about a screen test for the role of Yaya, fortunately my return date back to Lagos was in a week so as soon as I got back, I auditioned.

I was delighted when I got the role, Yaya really is a fantastic character to play.

So far it has been nothing but a lovely journey working with the Tinsel cast and crew, they’re very welcoming and professional.

I’m also happy that I can now be seen not just in Nigeria but around Africa too, that’s a beautiful blessing.”

Beverly Naya burst into the limelight with the movie ‘The Actress’ which was co produced by her mom and Lancelot Imaseun.

She has been going stronger ever since.