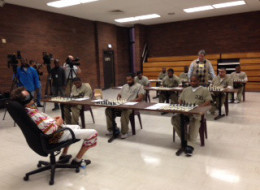 At Cook County Jail in Chicago, a chess program teaches inmates that patience and strategy are more effective than impulsive decision making.

The program must be working, because nobody got stabbed on Friday when grandmaster Timur Gareev simultaneously beat 10 prisoners even though he couldn’t see the pieces. Convicts went down in defeat, one after another, as a blindfolded Gareev called out his moves from a swivel chair at the front of the room, according toWBBM Newsradio’s Mike Krauser.

“It’s kind of almost a visceral sense of the experience that you take in. If you’re trying to memorize every single game, all the moves, all the variations, it’s quite impossible,” Gareev said. “But the memory has all the little tricks that makes it easier to create patterns.” … Inmate Anthony Wooden was cocky going in, since Gareev couldn’t see the board.“I know I can beat him,” he said. “I’ve been playing chess since the 6th grade.”

He didn’t win, but he was the second to last to fall to Gareev.

Gareev, a 25-year-old genius from Uzbekistan, said that multiple chess games at once makes competition more interesting. He pulled the same stunt earlier this year in Russia. He’s ranked as the No. 4 chess player in the United States, the Chicago Sun Times reports.

His next feat? Playing 50 chess matches simultaneously, which would earn him a world record for most concurrent games, the Sun Times says.