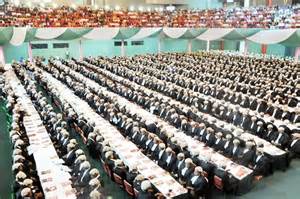 The Chief Justice of Nigeria (CJN), Justice Mariam Aloma Muhktar has counselled 5,025 new lawyers who were called to the Nigerian bar to observe the code of ethics for lawyers in carrying out their duties as ministers in the temple of justice.

Speaking, Thursday, at the call to bar ceremony which was held in Abuja, the CJN reminded the new wigs that they had an obligation to the court and the society.

She also noted that they have a duty as an officer of the court to assist the court in the administration of justice and to observe court decorum and etiquette.

“As lawyers, honour comes first and fees second; the profession has a code of honour which it requires its members to be obedient and it is a code which demands on the part of every lawyer, strict probity and the faithful discharge of his manifold duties which includes, duties to the community, duties to the public, duties to the client, duties to his professional colleagues and above all duties to the court.”

Mukhtar also called on the new lawyers to be punctual in all court appearances and whenever possible, should give prompt notice to the court and other counsel in case of any circumstances requiring their tardiness or absence.

Mukhtar added that when a legal practitioner could not attend court sittings; he should obtain the leave of court.

She further called on them to always conduct their case in logical sequence, thus assisting the court to follow the case with ease, adding that they must also show seriousness of purpose, frankness and honesty.

According to her, a legal practitioner should always be attired in a proper and dignified manner and abstain from any apparel or ornament calculated to attract attention.

The CJN said: “Every legal practitioner should treat the judge and magistrate with utmost courtesy. As a matter of practice, every legal practitioner must rise and remain standing when the judge or magistrate arrives in court, takes his seat bows and counsel bows in acknowledgment. Also counsel should show courtesy to one another and very importantly must accord due respect to their seniors.

“Every legal practitioner should know the correct mode of addressing the judge and professional colleagues and also must rise when addressing the court except when in chambers.”

In his own speech, the Director General of the school, Dr. Tahir Mamman, charged the new wigs to be good ambassadors of the law profession by distinguishing themselves in conduct within and outside the court. [ThisDay]