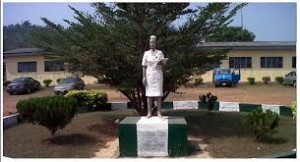 Relations of a deceased patient at the Ekiti State University Teaching Hospital has beaten a staff nurse to a pulp, for allegedly applying wrong medication.

The hospital guard who would have rescued the assaulted nurse, Mrs Mary Akinniyi, was allegedly attacked also, and flung to a nearby glass door which gave him some cuts.

The guard was however said to have called for back up and it was the arrival of the other security men that saved the situation.

The deceased, Mrs Beatrice Adepoju, who was said to be suffering from terminal liver ailment was said to have been kept at a faith-based home for months before she was brought to the hospital.

Acting Chief Medical Director of the hospital, Dr Kolawole Ogundipe, who spoke in Ado Ekiti, yesterday, alleged that the nurse’s hands were held to the back by one of the enraged relations while another held her by the throat.

“To us, this was not a reprimand by the relatives of the patient but a clear case of an attempt to kill an officer of the state in our employ.

“We are used to verbal attacks and other forms through which patients’ relatives react to the death of their loved ones. But this is different. The intention was to kill the staff on duty and that is the worrisome aspect of this, it was not to reprimand,” Ogundipe said.

The CMD, who was represented by Dr Kayode Ajite, said the patient was brought to the Accident and Emergency Ward (A&E) of the hospital where she was stabilised and subsequently taken to the Female Medical Ward on admission.

According to Ogundipe, “the patient’s condition deteriorated which made the nurse to request that the relations should get the necessary injectable that would keep the patient stable while they waited for the prescribed drugs.

“The patient in the process died and the ignorant relations thought it was the injection given by the nurse that caused the death, therefore transferred their emotion on her.

“Two daughters of the patient, who were at the scene, attacked our staff, held her hands, choked her and held her nostril. That was an intention to kill.”

The hospital management equally indicted the police for alleged covering up.

“The police are being partisan in the matter and we do not feel comfortable with that.

“Our integrity is at stake and we want the police to investigate the matter and clear our name and we have called for autopsy to determine the actual cause of the patient’s death,” the CMD said