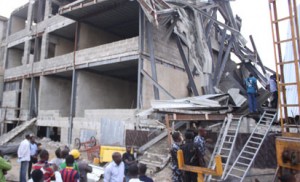 The Search and Rescue team at the five-storey twin-shopping mall under-construction which collapsed, Monday, at 9, Muri Okunola Street, Eti-Osa Local Government, has completed its job at the collapsed site.

The rescue agencies were made up of officials of the Lagos State Emergency Management Agency, LASEMA, Red Cross, officers of the Nigeria Police Force, Maroko Division and the Nigerian Security and Civil Defense Corps, NSCDC.

The exercise was completed at 6:45 pm, yesterday, with the recovery of the last trapped victim, identified as Mr. Dele Oyedele, the architect of the mall.

During the search and rescue operation, the uncompleted mall was levelled.

Head of Operations, LASEMA, Mr. Olusegun Magnus-Davies and Director, Lagos State Fire Service, Rasak Fadipe, who both confirmed the recovery in separate interviews with Vanguard, said the last victim had been recovered.

According to them, “he is the site architect and his name is Dele Oyedele. His corpse was recovered under the rubble.”

The relatives of the deceased present at the scene, declined request for interview.

Vanguard further gathered that the building caved in when the workers were trying to cast the decking to join both malls on the fifth floor.

One of the construction workers, identified as Abdullahi, who escaped unhurt, said he left the site at 3:55 pm to observe his prayers.

According to him, “After observing my prayer at about 4:05 pm, I ran out of the mosque to join my co-workers to complete the construction work. While still standing at the entrance of the building, the structure collapsed. It was like watching a Hollywood movie.

General Manager of LASEMA, Dr. Femi Oke-Osanyintolu, said the rescue officials worked through the night to rescue the trapped workers.

Oke-Osanyintolu added that his men had left the Great Nigeria House fire disaster scene to concentrate on rescuing those still trapped at the collapsed shopping complex.

According to him, “at least 25 people have been rescued but unfortunately we recovered five dead bodies.”

Director, Lagos State Fire Service, Rasak Fadipe, stated that the emergency officials in the state responded promptly by arriving the scene of on time. [Vanguard]