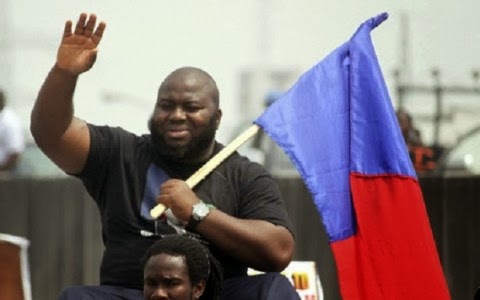 Repentant militant and leader of the defunct Niger Delta Peoples Volunteer Force (NDPVF) Alhaji Mujahid Dokubo-Asari, who was arrested on Tuesday afternoon in Cotonou, Benin Republic but was released on Thursday, has attributed his ordeal to an allegation which emanated from Nigeria that linked him to the dreaded Islamist sect, Boko Haram.

He also attributed his travails in the hands of the Beninoise authorities to persons, who he claimed are opposed to the 2015 re-election bid of President Goodluck Jonathan.

Looking unperturbed as he spoke with reporters Friday night upon his arrival at the Nnamdi Azikiwe International Airport, Abuja, Dokubo-Asari described as lies, reports that President Jonathan sent a Presidential Jet to bring him back to Nigeria immediately he was released by authorities in the neighboring West African country, which he has adopted as his second home.

He said, “Crisis is normal, it can also happen here in Nigeria, it can happen anywhere in the world. The people and government of Republic of Benin have no problem with me. But if people alleged that somebody is a leader of Boko Haram, the government of that country will investigate the person.

“The allegation has much to do with 2015 because when your read comments on social media, you find out that somebody who is against President Goodluck Jonathan, said they should vilify me and make sure I die before 2015. But they are not going to succeed. I am not going to die. I will be present in 2015, and I will do what I am going to do to ensure that Jonathan wins in 2015. There is nothing they can do about it. This is their last fight and it is so unfortunate that the way and manner they are going with it shows how immature they are”.

On the allegation that he was flown into Abuja aboard a Presidential Jet, Dokubo-Asari said, “I just arrived from Cotonou. I drove in my car from Cotonou to Lagos Airport where I boarded Aero Contractors flight to Abuja. The report is not true. No presidential jet was sent to me.

“That report is an instigated falsehood. Most of the things that have always been written against President Goodluck Jonathan is also falsehood. A section of the press in Nigeria is manipulated and instigated.

“I do business in Cotonou, and I have been living in Cotonou since 2008. Politically, people who are in Nigeria are trying to fabricate lies, which are not verifiable, and send it to the government of Republic of Benin. So I was taken for interrogation and they found that the allegations were false, and I was promptly released with over 20 of my staff who were also taken in”.

The ex-militant leader also spoke on his meeting with government officials of Benin Republic after his interrogation.