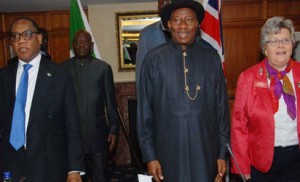 Doctors who examined and treated President Goodluck Ebele Jonathan for the sudden onset of severe abdominal pains in London have certified him fully fit to return home and continue his official duties.

After a thorough evaluation of the President’s symptoms, medically referred to as acute abdomen, the doctors concluded that no surgical intervention was required.

President Jonathan will therefore return to Abuja Sunday evening and will be at work in the Presidential Villa as usual on Monday.

The President is scheduled to depart from London at about 1400 hours GMT and arrive at the Presidential Wing of the Nnamdi Azikiwe International Airport at about 2000 hours.

According to a posting by New York University Medical Centre: “Acute abdomen” is the medical term used for pain in the abdomen that usually comes on suddenly and is so severe that one may have to go to the hospital. As opposed to common abdominal pain, which can be caused by minor issues such as constipation or gas, acute abdominal pain can signal a variety of more serious conditions, some of which require immediate medical care and/or surgery.”

Earlier today, the president’s media adviser, Dr. Reuben Abati described as fiction the story that he fell ill in London after a “heavy birthday party thrown to celebrate his 56th birthday” at the Intercontinental Hotel.

Abati, in a press statement expressed regrets that despite the open admittance of the president’s ill health in London, some online organs went ahead to make what he called ” scurrilous distortions of the facts of the President’s indisposition”.

“The truth”, said Abati, ” is that President Jonathan observed his 56th birthday anniversary quietly. For part of the day, he was airborne, in transit between Abuja and London. On arrival in London, he spent the rest of the day in the privacy of his hotel room. It has never been his custom to celebrate birthday anniversaries and no exception was made this year. No birthday party was therefore held for the President in London”. [PMNews]