A woman, Caroline Omoseebi, has asked the Alakuko Customary Court  in Lagos State to dissolve  her  44-year- old marriage to her husband, Ayemisan, on the ground that he wanted to use her for  rituals. 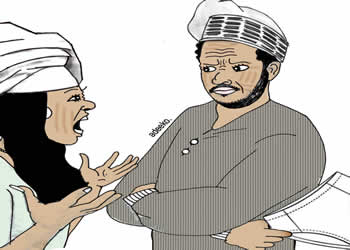 Caroline alleged before the court that her husband  took her panties to a  herbalist.

According to her, they got married 44 years ago and  have grown up children. She added that they were  living in harmony before their marriage started facing challenges.

“He is the one that deflowered  me, now he wants to use me for money rituals and has taken my panties to a herbalist. This was why I took my belongings  out of  his house,” she said.

Caroline further told the court that her carpenter turned pastor husband beat her often and didn’t  care  for her and the children.

“My husband  insisted that he has to be rich by whatever  means, and that was why he joined the secret cult. He has put a sign on my child for ritual purpose.
“He even tried to inflict me and one of our children with partial stroke.“Though he is the father of our seven children, I will not go back to his house,” she said.

Ayemisani denied all the allegations. He said that his wife was telling lies against him, adding that he is a pastor. He also alleged that they never had  problem until  she started moving with bad friends.

“Since she joined the club of bad friends 10 years ago, she has become uncontrollable,” he said.

Ayemisan told the court that he was not ready to divorce his wife and he was ready to change his ways.

The court president, Mr. Godwin Awosola, adjourned the case for judgment with a warning that the couple should maintain  peace.