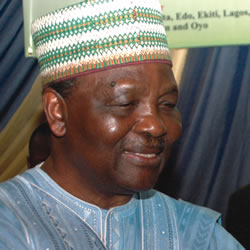 Former Nigerian Head of state, General Yakubu Gowon (rtd), yesterday decried the current insurgency in the country which he said was not only worrisome but alien to the country.

The former military ruler, who was at the saddle when the Nigeria-Biafra war raged, spoke in Ilorin, Kwara State, at a rally for the North-Central Zone of Nigeria Prays, of which he is the convener, held at St. Barnabas Cathedral, Ilorin at the weekend.

He identified insecurity, Boko Haram insurgency, militancy, corruption, and misappropriation of public funds, crimes, unmitigated violence and man’s inhumanity to man as some of the country’s problems bedeviling the country.

Gowon, who said the rally was staged in order to seek divine intervention against the identified challenges confronting the country, spoke on the theme, “Trust and faith in God to take care and charge of Nigeria”.

He said, “Let us pray for the current religious tension in our country, something that is quite worrying and disturbing and was alien to Nigeria in the recent past. Let us pray to God to help us contain them. May our Lord touch and change the hearts of those who are inclined and involved in these vices to refrain from them. Let our religions be for peace, love and respect for one another as Jesus loves and taught us. Pray against all forms of injustice, barbarism, cultism, idol worship and idolatry.

“We shall particularly pray for the leadership of our dear country at all levels, the executive, federal, national and state assemblies, states and local government councils, in business, corporate and private, and in all other areas”.