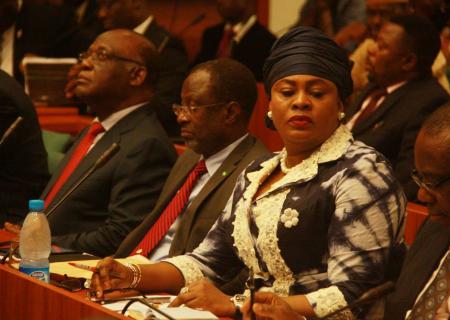 Embattled Minister of Aviation, Princess Stella Oduah’s defense over her role in the procurement of N255m bulletproof cars did not sway members of the House of Representatives Committee on Aviation as they have recommended her removal from office, Daily Trust reports.

According to the 2013 budget, the sum of N240 million was approved for the Nigerian Civil Aviation Authority (NCAA) for the purchase of 27 operational vehicles, but Oduah raised the sum to N643 million for 54 vehicles including two bulletproof cars.

A copy of the report which was seen yesterday by one of our correspondents indicated that the committee indicted the minister for ‘violating the law’ by approving expenditure above the ministerial threshold of N100 million.

Recall that Ms. Oduah, who was summoned before the aviation committee last Thursday, admitted giving approval to the Nigeria Civil Aviation Authority, NCAA, to purchase the N255 million bulletproof cars, insisting however, that due process was followed.

She also claimed the vehicles were provided for in the NCAA 2013 appropriation approved by the National Assembly and that they were not bought for her but for the operations of the NCAA.

Oduah had said: “After the purchase on a 3-year lease financing arrangement, the vehicles were never delivered to me. The vehicles were also not registered in my name. All I did was to approve the request of the agency doing the needful as evidenced by my minutes on the letter dated 15th April”.

On whether the purchase followed due process, she said: “Let me reiterate that from the records available to me, it would appear that the NCAA followed the due process required. I have been made to understand that there exist no guidelines issued by the Bureau for Public Procurement (BPP) on lease financing”.

But the committee’s report said having affirmed that she actually approved the request for the purchase of 54 cars for the NCAA worth N643 million against the approved N240 million by the National Assembly, Oduah had violated the appropriation act.

The report described as ‘flimsy’ the excuse by Oduah that she asked the NCAA to “Kindly do the needful,” after she had given approval.

The report also said the contract for the car purchase did not follow due process as ‘certificate of no objection’ from the Bureau for Public Procurement (BPP) was not obtained.

Therefore, the committee recommended that the minister be removed from office forthwith.

Others indicted by the committee’s report include former acting Director General of the NCAA, Joyce Nkemakolom and Coscharis Motors, which was the supplier of the vehicles.

Nkemakolom was indicted for inflating the contract sum, observing that the initial request letter to the minister was for N564 million, but it was jerked up to N643 million when the loan for the car purchase was finally taken from First Bank, which was the financier.

The report further accused the former NCAA DG of lying to the panel and Nigerians for saying the contract was advertized in the media, saying there was no evidence to show it wa publicized.

The report therefore recommended that appropriate sanctions be taken against Nkemakolom in accordance with civil service rules.

While faulting the N10 million waivers allegedly granted by Minister of Finance, Ngozi Okonjo-Iweala to Coscharis, when there was no practical evidence to show that the beneficiary fulfilled all the requirements to enjoy such benefits, the committee’s report also questioned her powers to approve such waiver.

Coscharis Motors was also indicted by the report for not only lying to the committee but also misleading the National Security Adviser (NSA) into believing that the cars were supplied to the Lagos State Government for Eko 2012 Sports Festival when there was no such arrangement with that state government.

It also accused Coscharis of conniving with NCAA officials to inflate the cost of the armoured cars, even though the whole transaction was done contrary to laid down laws.
-Daily Trust