Home National News Odd News PHOTO: How I Was Possessed By Evil Spirit That Pushed Me To...
Facebook
Twitter
WhatsApp 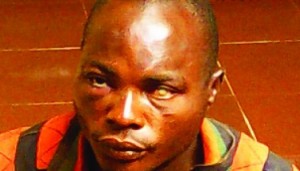 A middle aged man, Joseph Emeka Okoro, who was arrested for murder by the police in Isu, Onicha Local Government Area of Ebonyi State has blamed the crime on evil spirits.

Okoro, who was arrested for allegedly killing two of his kinsmen at  Umuniko  in Isu area of the state told the police that he was pushed by some evil spirits to commit the crime.

According to the police spokesman in the state, Mr. Chris Anyanwu, the suspect was arrested on November 14, 2013 after he attacked and killed two of his kinsmen; Peter Awoke and Sunday Agar with machete while they were working on their farms.

The police said two other victims, who sustained serious injuries from the attack, were currently lying critically ill in an undisclosed hospital.

Okoro confessed to the crime at the state police headquarters when the police paraded him saying he had been having the urge to kill before the incident.

The suspect claimed that he returned from Lagos two days before he committed the murder  adding that any time the spirit came upon him, he would be restless.

He however pleaded that he had no intention to kill, but that the spirit keep on disturbing him until he saw the first man whom he killed and some others on whom he used the machete.

“I know those people that I killed, but I didn’t know why I killed them or when I did it. They are good people whom I have never had any quarrel with. I think an evil spirit possessed me.”

The suspect further explained that  the manipulations of the evil spirit was further worsened by the effects of some hard drugs injected into his body by assassins hired by his former master in Lagos to kill him before he came back to his hometown.

While narrating his ordeal in the hands of his former master whom he claimed refused to settle him after years of meritorious service, Okoro said the man instead hired assassins to kill him.

“Whenever this spirit came upon me, it will just be like I was mad. That was worsened by the effects of the drugs I was injected with by some people hired by my former master to kill me. I have never seen such powerful drugs in my life. I was given up to 48 injections.”

Okoro claimed that his former master came after him even when he escaped to a white garment church and told the church members that he was mad.

“But while I was there , I asked to make a phone call and they obliged me. After the phone call,  church members started wondering how a mad man was able to know the numbers to call and discuss  coherently.

“I sold my phone for N5,000 to be able to raise money to come back home. I have never killed before; even one of the people  I killed was my in-law.”

Meanwhile, PPRO Anyanwu said it took the efforts of youths in the area and a team of policemen from Onicha Divisional Police Station to arrest the suspect, who took to his heels after committing the crime.

A community leader in the area, Hon. Ogbonnaya Igboke who spoke to Sunday Sun regretted the incident, saying that he could not comprehend how a right thinking man would use a machete to kill fellow human beings for no reason.

He further explained that bodies of the victims have been deposited at the Onicha General Hospital mortuary  adding that efforts were being made to ensure that there was no breakdown of law and order in the community.

Meanwhile, Okoro has been charged to a magistrate court sitting in Abakaliki, which remanded him in prison custody. The court then adjourned the case to January 13, 2014.