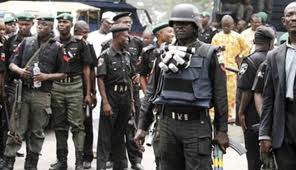 The Delta Police Command says it has gunned down two armed robbers at Owhosa Street, Aladja, in Udu Local Government Area of the state.

The Police Public Relations Officer of the command, Lucky Uyabeme, said in a statement issued on Monday in Asaba, that the robbers were killed on Saturday during a shoot-out between them and the police.

According to the statement, the police at Ovwian Aladja received a distress call from a resident of the area and immediately mobilised to the scene.

The statement said that on sighting the police, the robbers opened fire on them and in the ensuing gun duel the two armed robbers were killed while two others escaped.

It said that one locally-made pistol, one cut-to-size single-barrel gun and a double-barrel gun as well as three live and one expanded cartridge were recovered from them.

It also added said that efforts were on to fish out the fleeing suspects and bring them to justice.

Mr. Uyabeme said in another statement that the command also arrested two suspected kidnappers and rescued their victims at Ogwashi-Uku, in Aniocha South Local Government Area of Delta on Monday. He said that the suspects had kidnapped kayoed Obuhoro of Obosi Layout Osubi, near Warri while he was driving in his Toyota Highlander jeep with registration number JJJ 806 BD.

The statement said that the police in Ogwashi-Uku intercepted the vehicle and arrested the suspects.

It said that the suspects confessed to the crime and led the operatives to the hideout where the victim was kept.

According to the statement, the suspects engaged the policemen in a gun duel and in the process one of the suspects was killed, one wounded and the victim rescued.

The statement added that another kidnap victim, Adeke Ugor, was rescued from the hideout 11 days after she was abducted.