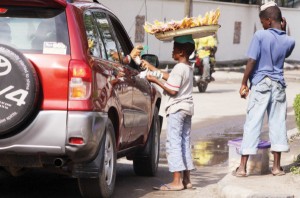 Eight out of 10 Nigerians (80 per cent) revealed that there is a high prevalence of child labour in the country, according to the results of a special edition poll released by NOIPolls Limited.

The poll also disclosed that 86 per cent of respondents confirmed that children are usually engaged in physical labour and jobs in their localities.

Furthermore, majority of the respondents (72 per cent) blamed poverty as the root cause of the high prevalence of child labour/slavery in Nigeria.

According to a NOIPolls release issued in Abuja yesterday, these were some of the key findings from the Child Labour Special Edition Poll conducted in the week of November 4.

According to the organisation, a sample of 1,017 randomly selected phone-owning Nigerian adults, 18 years and above, representing the six geo-political zones in the country, were interviewed by telephone using randomly generated numbers.

The key suggestions that emerged from the poll to eradicate child labour in Nigeria were “Free and compulsory basic education” (34 per cent); “Creation of more job opportunities” (27 per cent); as well as the ‘creation of poverty eradication programmes and youth empowerment schemes’ (19 per cent) to generally improve the livelihoods of Nigerians which would in turn reduce the reliance on child labour for survival.

The International Labour Organisation (ILO) defined child labour as, “Work that deprives children of their childhood, their potential and their dignity, and which is harmful to physical and mental development.”

This refers to work that is mentally, physically, socially or morally dangerous and harmful to children; interferes with their schooling by depriving them of the opportunity to attend school; obliging them to leave school prematurely; or requiring them to attempt to combine school attendance with excessively long and heavy work.”

The ILO further explains that the most extreme forms of child labour involves children being enslaved, separated from their families, exposed to serious hazards and illnesses and/or left to fend for themselves on the streets of large cities mostly at a very early age.

Despite several measures to combat child labour, it continues to remain of great concern in Nigeria. The Nigerian Child’s Rights law, which took into account the rights guaranteed in the United Nations’ Convention on the Rights of the Child was passed in 2003. Ten years after its incorporation in the Nigerian law, the child labour situation has worsened as millions of children are still engaged in child labour activities.

In line with this, the ILO estimates that about 25 per cent of Nigeria’s 80 million children under the age of 14 are involved in child labour. Also, recently the CNN world’s child labour index featured Nigeria amongst the top ten worst countries for child labour.

Against this background, NOIPolls conducted its special edition poll on Child labour/slavery in Nigeria to explore the views of Nigerians on the prevalence of the issue, as well as identify the causes and remedies that can help curb the situation.

Findings also revealed that the most common type of job which children are usually seen engaged in are “Street hawking” (68 per cent) and “Street begging/roaming” (31 per cent).

In order to reduce the issue of child labour in Nigeria to its barest minimum, the majority of respondents (34 per cent) suggested that “free and compulsory basic education” would go a long way in curbing the issue.

NOIPolls Limited is the leading organisation for country-specific polling services in West Africa. It works in technical partnership with the Gallup Organisation (USA), to conduct periodic opinion polls and studies on various socio-economic and political issues in Nigeria. [Thisday]