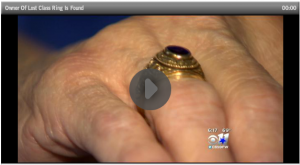 The mystery behind a long-lost ring has finally been solved, bringing closure and a new friendship to two North Texas families.

A 1967 Richardson High School class ring was discovered amongst the possessions of 81-year-old Betty Flanery Bailey, who recently passed away in Rogers, Texas, according to the Courier News.

“At first, I thought it must be one of her sisters’ rings,” Bailey’s daughter-in-law, Edith Ann Evans, told CBS last week. “But the years didn’t match up. Then we began to realize that it was something that she had found and just stuck away.”

On Tuesday, they found a match in Patsy Johnson, who said she’d lost the ring many years ago, most likely during a move.

“It was almost like it was meant to be, the way all the puzzle pieces fell in,” Johnson told CBS when Evans visited her in McKinney, Texas, to return the ring. “I’ve got a birthday coming up in 3 days and it’s the best birthday present.”

Earlier this year, a diver discovered a 1974 class ring in a river in South Carolina. He too tracked down its owner, who had been diagnosed with terminal cancer, and returned it just in time.